“Sagichou” is a fire festival event to be held in the lunar New Year (January 15).

“Sagichou” is called differently depending on the region.
My locality is called “dondo-yaki”. Other name is “tondo-yaki”, “saito-yaki”, “sagiccho” etc…
This event will be held in various parts of Japan. And, it is often done as an event of a children’s association.

Well, what is “Sagichou”?
“Sagichou” burns the “Kaki-zome” (New Year’s writing) , “Kadomatsu” and the the New Year holiday’s decorations. (This is sometimes collected by children.)

And they make a big turret by New Year holiday’s decoration and bamboo. And it’s burned.

In “Sagichou”, they baked “Mochi” (rice cakes) and “Mayu-dama” (rice cakes made with rice flour) by this fire. It is said that if they eat it, they are “disease-free” for a year.

“Sagichou” also burns old lucky charms. For example, old “Daruma” and amulets of lucky charms bought at the shrine.
In Japan, we will burn the lucky charms with the shrine or “sagichou” without throwing it in the garbage.

“Sagichou” is an event with various characteristics in various parts of Japan. 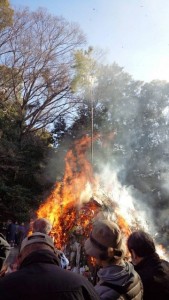 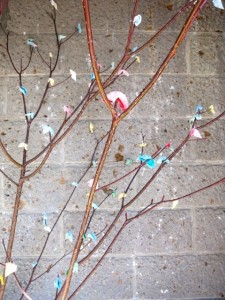