Today’s Japanese word “Suika-Wari”(Watermelon split).
“Suika-Wari” is play to blindfold you, and to chop a watermelon with a stick.

Generally, the play of “Suika-Wari” is often carried out in the sandy beaches.
However, it is held also in nursery school gardens or various event venues and so on. “Suika-Wari” is the Japanese tradition of summer.

I will introduce the rules for reference.
・Distance between watermelon and athlete
: 9.15 meter.
・Watermelon breaking rod
: Within 0.05 meter in diameter, within 1.2 meter in length.
・Japanese towel for blindfolds
: A thing of the JSWA official recognition.
(Is it blindfolded properly? If you check blindfolded, you try dropping a 10, 000 yen bills (Japan’s high-price bills) in front of the competitor.)
・Watermelon to use
: Japanese watermelon (well ripe thing).
• Time limit
: 3 minutes.
• Referee
: Eat more than 10 watermelons of that year.

Of course we eat watermelon after breaking. However, in the case of the outdoors, does the section of the watermelon become dirty?
Therefore, we will lay down the ground sheets under watermelon. 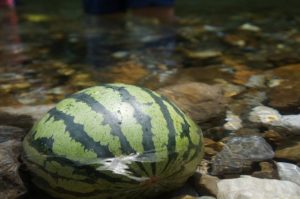 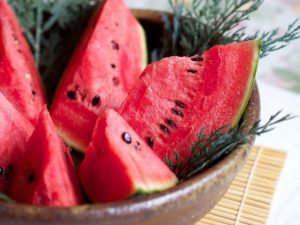