“Yokai” is born from the all the gods and goddesses in Japanese spirits.
In every era, they think to be supernatural about the things they do not understand. It is called the “Yokai”.

“Yokai” is also appeared in the folk history.
“Oni” (Demon) and “Tengu” is famous.
Others, Japanese believe that is old animal or old object has been transformed.

There are also a lot of comics and books about “Yokai” in Japan.
The cartoonist of “Shigeru Mizuki” wrote the “Gegege-no-Kitaro”.
“Yakumo Koizumi” (Real name ： Patrick Lafcadio Hearn) has gathered the story of the “Yokai” in Japan in the book called “Kaidan”. 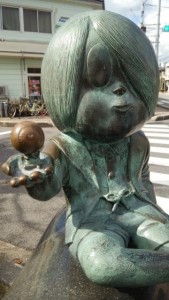