“Sushi” is the serving of specially prepared vinegared rice combined with varied ingredients such as chiefly seafood.
Styles of sushi vary widely. But the key ingredient in all types is the sushi rice, also referred to as “shari” or “sumeshi”. There are many kinds of “Sushi”. For example, “Nigirizushi”, “Chirashizushi”, “Inarizushi”, “Makizushi”, “Oshizushi” and so on.

“Sushi” is often confused with sashimi, a related Japanese dish consisting of thinly sliced raw fish or occasionally meat, and an optional serving of rice. It is called “Sashimi teisyoku”. Sashimi is served as slices, unlike sushi. 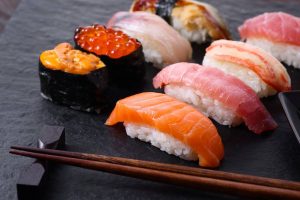 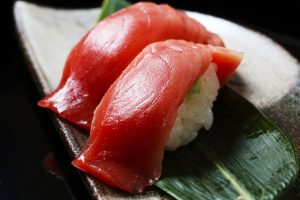