“Sanma” (saury) is a fish inhabiting the North Pacific widely.
It is edible and is popular fish representing autumn taste of Japan.

“Sanma” in autumn has much fat content and is delicious.
In particular, “Shio-yaki” (grilling fish with salt) is called the representative of “The autumn taste” of Japan.

We call the grilled “Sanma” with salt “Sanma-no-shio-yaki”.

When we eat “Sanma-no-shio-yaki”, we squeeze the juice of “kabosu” (Japanese citrus fruit) , “sudachi” (citrus), “yuzu” (citron), lemon or limes on “Sanma”. And also we use soy sauce or “Ponzu” (soysauce with a juice pressed from a bitter orange) for eating.
“Daikon-oroshi” (grated radish) is often put on side, too.

“Sanma-no-shio-yaki” is loved very much by Japanese. It is eaten as home-cooked meal and even the set of meal at the reasonable restaurants.

It is a popular fish so that “Sanma” festival is held in various parts of Japan.

“Sanma” is not only eaten as in grilled fish, but also often eaten as “sashimi” and “sushi”. It is also very delicious! 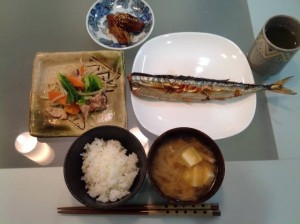 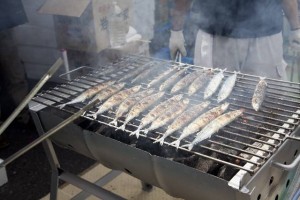 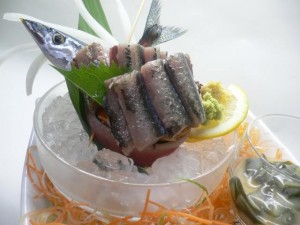 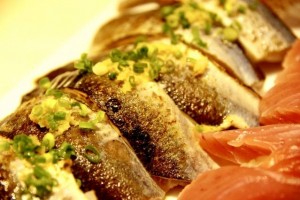