By the way, “Hotaru-ika” which is in Toyama Bay (representative production center of Japan) is called “Toyama squid”. At local, it is also called “Matsu-ika”.

“Hotaru-ika” usually inhabits the deep sea of 200-700m.
When spring comes, female “Hotaru-ika” appears to the shallows before the daybreak for laying eggs, and they shine their body before dying. Early summer is the best breeding season.

The local people of Toyama call this ovipositional status “Hotaru-ika no minage” (Firefly squid drowning itself).

“Hotaru-ika” has about 1, 000 photogenic organ in their body.
The emission of blue light of the tens of thousands of “Hotaru-ika” drowning itself is very fantastic and is beautiful.

People comes at this time to see the “Hotaru-ika”, and fishing person appears, too.

They capture “Hotaru-ika” in the surface by fixed shore net fishing in the night.
Also, a sightseeing ship to observe this night fishing is navigated only in a period only for fishing season.

“Hotaru-ika” is edible. You can eat by “nimono” (boiled and seasoned with soy sauce), “suboshi” (wind dried fish), “tempura” (fried), and only foot as “sashimi” (sliced raw fish).

If you don’t like eating squid, please watch “Hotaru-ika no minage” by an animation. 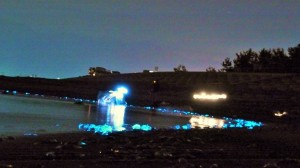 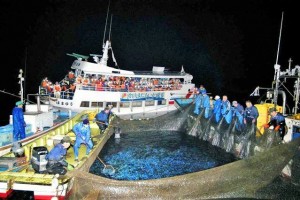 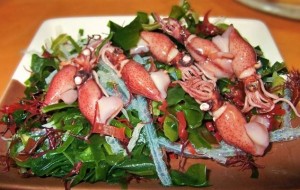