“Hagoita” is a wooden racket drawn a beautiful picture. It is a tool of ”Hanetsuki”.
”Hanetsuki” is played by young girls in mainly New Year. It resembles badminton.

It was created as a toys in Muromachi era. It has come to be used as exorcism and became habit of gift to women in the New Year.

“Hagoita” is painted a beautiful picture, and cloth-embroidered picture of the human. Some “Hagoita” are also popular as beautiful ornaments.

Every year, “Hagoita-ichi”(hagoita Battledore festival) will take place as a traditional event on December 17 to 19.
“Hagoita-ichi” in Senso-ji Temple of Asakusa is bustles with many tourists.

“Kyugetsu”(Japanese doll shop of long-established) makes a special “Hagoita” every year. It is drawn people in the news this year.
In modern times “Hagoita” has been designated as traditional crafts of Tokyo. 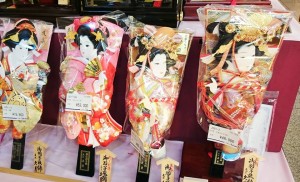