“Yabusame” is a Japanese traditional ceremony of the equestrian archery.
It is an old event to shoot the “Kabura-ya” (whistling arrow) from horseback running at full speed.

“Yabusame” is inherited in each hometown including the Shinto priest, parishioner and preservation society. A sporting event of the “Yabusame” is carried out by an equestrian archery competition lover, too.

Origin of the “Yabusame” as one of the actual archery from horseback had begun in the Heian era.

However, it became outdated at one time as martial arts and the weapon evolved. Currently, “Yabusame” is actively performed in many local areas in Japan as a Shinto ritual. And it is a main tourist attraction.

There are some rules to perform “Yabusame”.
1) On the straight course, a horse gallops for about 218 meters.
2) On the left side along the run area, three targets are placed in a specified distance apart.
3) The distance between the rider and the targets is about 5 meters. The targets are hung about 2 meter high. (The distances vary according to the schools or the rules.)
4) An archer, dressed in hunting gear, spurs his horse into a gallop while shooting his arrows one after another.

In the Kanto district, “Yabusame” is performed as Shinto ritual in each Shinto shrine from spring to the autumn.
It is one of the sightseeing spots to want you to go if you come to Japan. 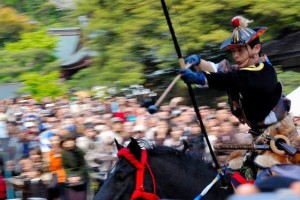 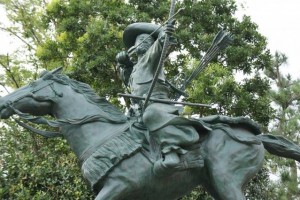