“Noh” is one of the traditional Japanese arts. Also it is known as the “Noh-Gaku”.

As for “Noh”, dance and music are the main.
There are the vocal music called “Utai” and the player called the musical instrument performance called “Hayashi”.
And in “Noh”, the story progresses by the ritual dance. Briefly, “Noh” is similar to musicals and opera.

Another feature, “Noh” uses the mask. This mask is called “Noh-men” or “Omote”.
The protagonist who is called “Shite” and an actor who is assisting the protagonist use “Noh-men”. They use it when play superhuman existence (an old man, the gods and Buddha, a hermit and ghost).
In addition, “Shite” attaches a mask when they play a young woman or old woman, a boy.

“Noh-men” is very important for an actor with a tool to transform itself into a completely different role. But “waki-Gata” (play a man of reality) and “Kyogen-Gata” (person giving a comical performance) can not use a mask.

“Noh” is staged on the exclusive stage called “Noh-butai” (Noh stage). Repertoire of “Noh” is currently about 260 songs.

The story is often used from an old Japanese literary work as materials.
And it is unique in wording. 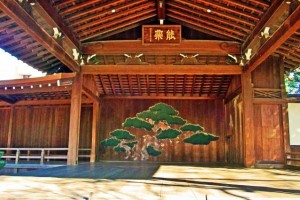 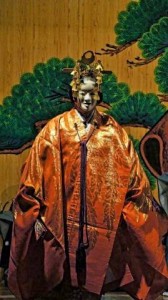