“Kadomatsu” made from pine trees and bamboos. It is decorated in front of the gate of the house in the New Year.
“Kadomatsu” is one of the New Year decorations. And it is the ornament for welcoming an new year’s god in our house.

In old time, Japanese people thought that God live at an evergreen trees, and God would stay in evergreen trees. Among them, the pine is special.
In ancient China, “pine” was regarded as a symbol of life force, longevity, prosperity.
Also, in Japan it was a pine tree as a happy tree.

When it’s after December 13 when enter “Matsu-no-uchi” (New Year holidays), it’s good anytime to display “Kadomatsu”.
However, we avoid starting the decorating in Christmas, December 29th and 31st. It is avoided traditionally on that day.

“Kadomatsu” is traditionally decorated until January 15th in “Matsu-no-uchi”.

“Kadomatsu” are one of the symbols of New Year holidays in Japan. 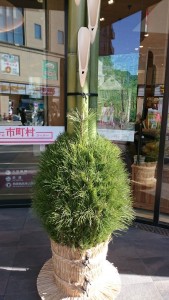 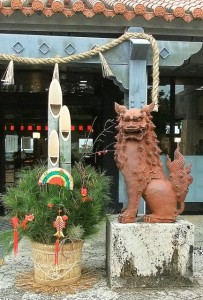