In most of Japan, the rainy season lasts from early June to mid-July.
It starts from Okinawa. But Hokkaido is largely unaffected.

In these season, we generally avoid traveling outside.
But some tourist spots are wrapped in the rain and fog, it is very beautiful.
Especially the moss is also rather lush at this time.

The popular spot of the moss is “Saihoji Temple”.
It is called “Koke-dera” (the moss temple), it is a famous temple in the moss.

In addition, there are the flowers of “Ajisai” (hydrangea) begins to bloom beautiful.

In the “Tsuyu”, it is hot and humid and is unpleasant. but there is a way of enjoying in “the rainy season” peculiar to Japan.

[ Information ] “Saihoji Temple”（world Cultural Heritage）
■important:
Tour is a prior appointment by a postcard.
(When admission is it is a condition to participate in the religious ceremonies, such as Sutras)
■Address:
〒615-8286
56 Matsuokamigaya-cho, Nishikyou-Ku, Kyoto-city, Kyoto
■TEL: +81-75-391-3631
■URL: http://tabinoshiori.web.fc2.com/kokedera.html
■Access:
From “Kyoto Station”, Kyoto bus 73 lines or 83 lines, ride to “Kokedera Suzumushitera”.
Alighting the end point “Kokedera Suzumushitera”, walk from 2-3 minutes. (Bus fee 270 yen). 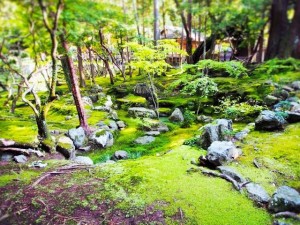 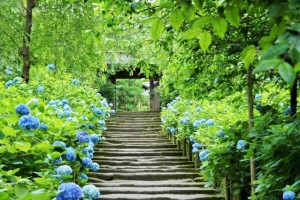