The other day, “Kabuki-za” in Ginza of Tokyo opened newly.
“Kabuki-za” is the famous tourist spot in Ginza.

Well, what is “Kabuki”?
“Kabuki” is a theater peculiar to Japan. And it is one of the traditional performing arts. And it is an important intangible cultural asset in Japan.
In addition, it became the Intangible Cultural Heritage in the UNESCO.

The name of “kabuki” derives from a Japanese verb as “KABUKU”.
“KABUKU” is a slang of an archaic. The meaning refers to those who prefer wearing fancy costumes, different from everyone else.
It is said that the movements of those people are the beginning of “kabuki”.

There are many programs of “kabuki”.

・”Jidai-Mono” (Historical play).
The program originated with a record of the war and folklore.
Main program: “Yoshitsune Senbon-zakura” , “Kanadehon-Chushingura” (Revenge of the Forty-Seven Ronin).

In addition, there is a lot of Japanese word which came out of “Kabuki”.
There is often also the used word. 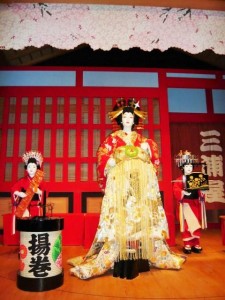 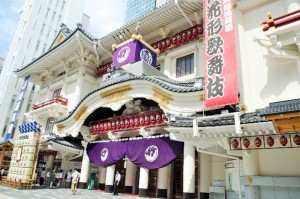