Today’s Japanese word is “Nengajo”(New Year’s cards).
The Japanese New Year has many own customs.
“Nengajo” is one of them.
We have a custom of sending “Nengajo” to their friends and relatives.
It is similar to a custom of sending Christmas cards.
Post office will sell special postcards and stamps for the “Nengajo”.
“Nengajo” is also one of the tools that inform to the friends who you have not met recently about own recent situation.
In Japan, in case of death of family, we have the habit of not sending “Nengajo”.
But, as the greeting to the people who helped me and to friends, we send “mochu-hagaki” (mourning postcard) by the end of the year.

We prepare the “Nengajo” from mid-December. And, we have to post the “Nengajo” before deadline. So it can arrive on January 1.
To deliver these cards on January 1, many part-time “Nengajo” delivering staffs are hired by the post office.
From the end of December to the beginning of January, Japanese post offices are in the busiest season.
By the way, in “Nengajo” we use the traditional greeting words.
For example,
・”akemashite o-medeto-gozaimasu” (A Happy New Year)
・”kotoshi mo yoroshiku o-negai-shimasu” (I hope your favor again in the coming year)
How about trying these words on your greeting cards? 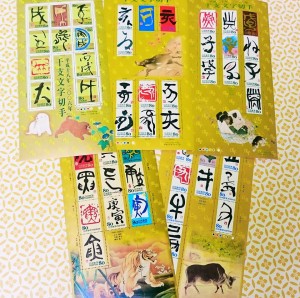 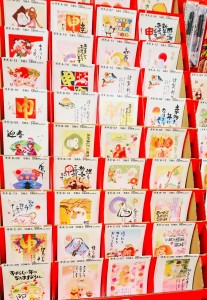