“Oni wa soto, fuku wa uchi” (Out with the devil! In with good fortune!!)
Have you heard this phrase?

This phrase is the shout of “Setsubun”, all Japanese know it.

Also, we eat the “Ehomaki” and “sardines”. “Ehomaki” (lucky direction roll) is rolled sushi inside 7 ingredients considered to be lucky.
In addition, we decorate sardine heads and holly leaves.
This habit is the traditional sense.
This time, we’ll explain about the “mame-maki”.
First, why take place in February 3?
“setsubun” means the parting of the seasons.
And Setsubun is the day before the beginning of each season
(the first days of four season（spring, summer, fall and winter)).
Out of all the four “Setsubun” days, Risshun (the first day of spring, february 4) is the most special day.

Old days in Japan, spring was very important.
They thought the “Spring” is “New Year”.
So, they thought of expelling the demons from their houses, before new “Spring”.
By the way,
throwing roasted soybeans was first time in the Heian era.
They believed, throwing soybeans were expelled devils.
So, when you throw the soybeans, you shout “Oni wa soto, fuku wa uchi”.

The end of throwing soybeans, you pick up it and eat the same number of soybeans as your age. You hope stay healthy for the whole year.
The important thing, in “mame-maki”, we use the roasted beans.

If the beans sprout, it’s not lucky. Because that used to ward off evil. 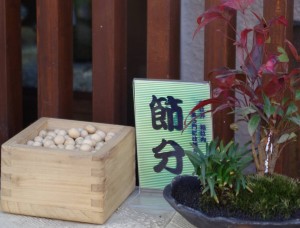 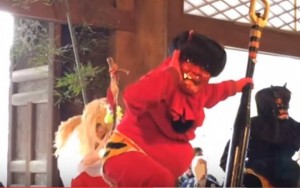