“Takenoko” are the edible bamboo shoots (new bamboo culms that come out of the ground) of many bamboo species. We use it as Japanese dishes.
They are sold in various processed shapes.

Raw bamboo shoots contain cyanogenic glycosides, natural toxins also contained in cassava. The toxins must be destroyed by thorough cooking and for this reason fresh bamboo shoots are often boiled before being used in other ways.

In Japan, “Takenoko” is harvested in spring or early summer. Young shoots are highly sought after due to its crisp texture and sweet taste. However, older bamboo shoots, have an acrid flavor and should be sliced thin and boiled in a large volume of water several times. The sliced bamboo is edible after boiling.

We cook “Takenoko” as “Ni-tsuke” (boiled food) or “Takenoko-gohan” (“Takenoko” with boiled rice). It is one of dishes in the spring. 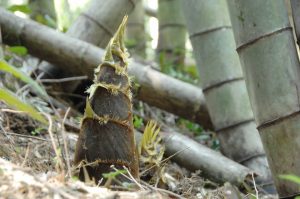 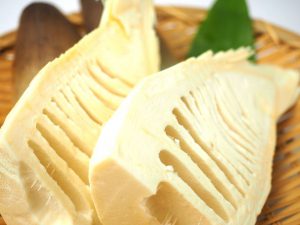