Okosama lunch (Child’s Meal) is a menu prepared for for children (generally lower than the elementary school lower grades) in family restaurants.
It is called “a lunch”, but we can order other than the lunchtime. In addition, it is a menu for children, and there is often an age limit.

Generally, the lunch plate which was divided to serve several points of dishes in one plate is used. There are many kinds of modelled plates, such as the vehicle, the “Shinkansen” or the airplane. And the popular character for children is drawn on a plate.

There are foods in kids’ lunch.
・rice; a colorful rices such as chicken pilaff, omelette or fried rice are often served. And it is shaped like a mountain. A small flag made with a toothpick and paper is often put up on the top of mountain.
・side dish; a popular dish is a hamburger steak, a fried prawn, fried chicken, Neapolitan and French fries.

In the family restaurants, they have a drink such as orange juice, and dessert such as a pudding or the konjac jelly. For good measure, a caramel or the chocolate and a small toy is presented to children. 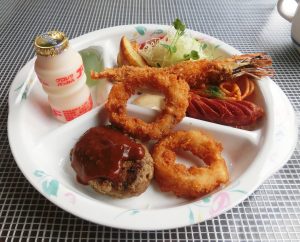 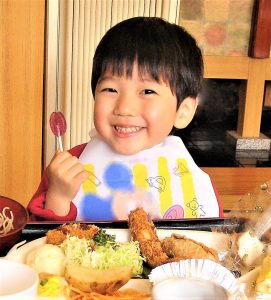