The Muroto Cape in Kouchi-pref. is approved to Global Geopark in 2011.
It’s also one of famous sightseeing spots in Kouchi such as the “Katsura Beach” known by Ryoma Sakamoto.

This cape is a land upheaval caused by a big earthquake nearby the Philippine Sea Plate. Frequent earthquake formed this land from about 10, 000 years ago.

It is also famous place to worldwide geologist. About 48km coastline faces to the Pacific Ocean, but you can see rough waves like the Sea of Japan effect by strong wind.
Therefore, it is able to see the sunrise and sunset from here!

Nearby the Muroto Cape, the lighthouse is a white colored metallic lighthouse built in 1899. The 49km of a visible distance is the longest in Japan.
The caves, Mikuro-do 御厨人窟 and Shinmei kutsu 神明窟, nearby are famous places where “Kobo Daishi” (a posthumous title of the priest Kukai) had a training. It is also popular locations flowing spiritual power.

Because the convenience to transportation to Muroto Cape is not good, attention is necessary! 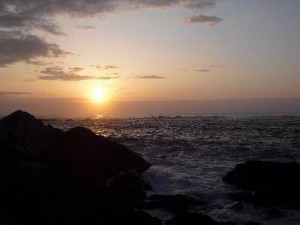 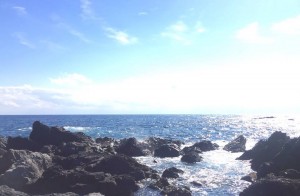