The “Kumade” (rake), is one of the tools that are used in agriculture and the cleaning of the garden.
It is the handle, and the tip of it is arranged bended the thin plate in a fan shape.

Why would the rake of the cleaning tool become “auspicious rake”?

There are several legends.
1) The tool for raking.
We believe that “collect the luck” or “collect the gold and silver or money”. It gradually be regarded as a lucky charm.

2) Catch a luck, as holding by eagle’s legs.
It became the good luck charms which “Catch a luck” because a rake looked like the legs of the eagle.

3) Historical story about the fan of the “military commander’s”.
A military commander won by a war after having prayed to God for their victory.
When they won, the fan’s form of the military was like the rake.
So, “auspicious rake” is to have become the talisman from this story.

By the way, “Kissho-kumade” will be bought every year.
There is the habit of buying a big thing than before. 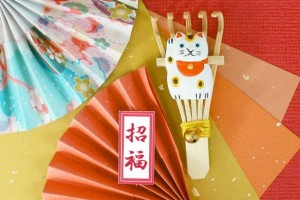 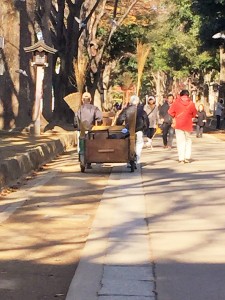