“Daruma” is object or a toy. It is the Great Dharma’s Zen meditation form of the Zen sect (Buddhist sect) .
Now, it’s popular as a lucky charm.

Well, most “Daruma” has red color. Because “red” has been believed to have the effect of amulet.
In the Edo era, a “daruma” was believed by the meaning of “eliminate smallpox”.

By the way, eyes are not written on “Daruma”, when it has been just bought.
Is not it strange?
When we pray, we write the eye of “Daruma”. But we write only one eye.
And if a wish comes true, we write the other eye.
But, we write both eyes from the beginning. The different depends on the kinds of the prays.

The production of “Daruma” is mainly in Takasaki city of Gunma prefecture.
In Takasaki, there are production 80% of “Daruma” of Japan. It developed as a side business of the idle seasons for farmers.

“Shorin-zan Daruma-ji” (Takasaki) holds “daruma fair” from January 6 to 7 every year. This will be done overnight.
Well, “daruma fair” is held nationwide in January.

I also watched it very much when I was a child.
It is one of the pleasures of cold Japanese winter. 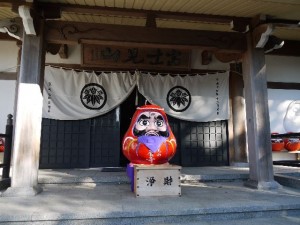 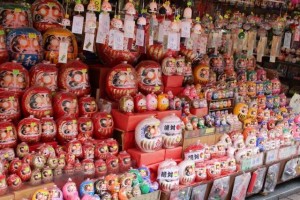