“Ume-boshi” (pickled plum) is the food which “Ume” is dried in the sun after preserved in salt. It is one of the Japanese pickles.

“Ume” (plum) is a 2-3 centimeter spherical fruit like a stone. There are many kinds of “Ume” which is cultivated only in a specific area.

We eat the “Ume-boshi” without cooking, such as eat with the rice, and eat as ingredients of the “Onigiri” (rice balls).

The taste of the “Ume-boshi” is very sour, but it is told that “Ume-boshi” has an antibacterial / aseptic effect, an effect of relieving fatigue and an antipyretic effect (folk remedy), so many Japanese eat willingly.

It is said that the “Ume-boshi” is the food which affected the health (longevity) of Japanese.

We use a ripe “Ume” harvested around June for making the “Ume-boshi”.
After having preserved “Ume” in salt, we dry it in the sun for 3 days.
In this status, “Ume” is superior in preservation, and salt becomes around 20%. We preserved the “Ume” again and ripened it after drying. Then it’s the traditional “Ume-boshi”. 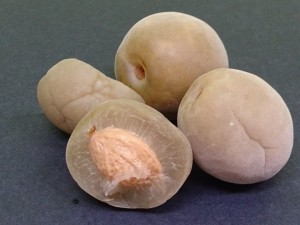 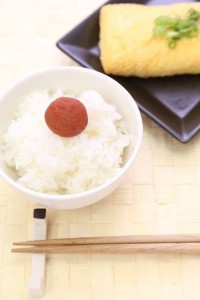 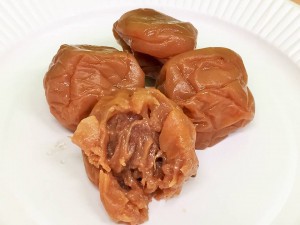 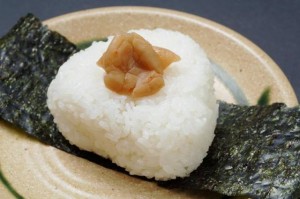