It is a bowl dish with stewed beef (slicing meat or small pieced meat) and the onion with salty-sweet tasting broth. It is called “Gyu-meshi” as another name.

The dish which sprinkled “sukiyaki” to a bowl meal was a model of the “Gyu-don”. It was born in the Meiji era. It is said that Eikichi Matsuda who founded “Yoshino-ya” in 1899 named “Gyu-don”. The first store of “Yoshino-ya” opened in “Tsukiji”.

The bowl which put the beef and an onion is often at major “Gyu-don” chain store.
In addition, red pickled ginger, “Shichimi Tougarashi” (red pepper with seven kinds of spices), and a raw egg may be used as adding to your liking.

“Gyu-don” is often seasoned on the basis of soy sauce, but the first Japanese “Shio gyudon” (salt beef bowl) which Kobe “Ranpu-tei” released in 2010 used salt broth for seasoning. 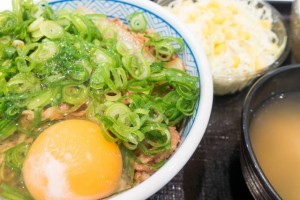 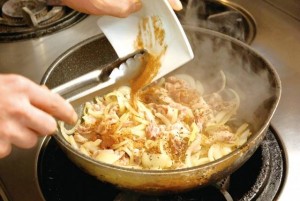 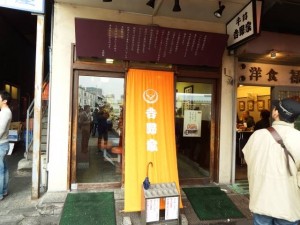