It is the traditional festival from the early Edo era.
This festival was feudal lord “Date Masamune” began it.
However, the details of the origin of the festival is unknown.

In the “Sendai Tanabata Festival”, it is composed of seven types of decoration.
It is called the “Nanatsu-kazari” (seven decoration).
1) “Tanzaku” (strip)
2) “Kamikoromo” (clothes made from paper)
3) “oriduru” (paper cranes)
4) “Kinchaku” (a money pouch)
5) “Toami” (casting net)
6) “Kuzukago” (wastebasket)
7) “Fukinagashi” (windsock)
Each decoration is meaningful.
For example, “paper cranes” mean is “longevity prayer”.

During the period, it is visited by many tourists more than 2 million people every year.

From “Tokyo station”, ride on “Hayabusa” (“Tohoku Shinkansen”) for 1hour 30min.
Get off at “Sendai station”. 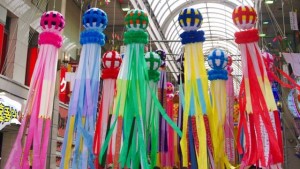 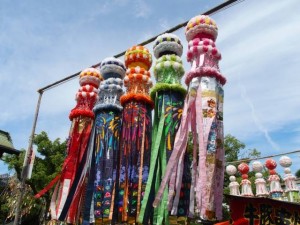