The “Kitano Kobe Ijin-kan-gai” (foreigner’s house street) is the sightseeing spot very near from “Sannomiya Station”, that is the terminal station of Kobe.

After the opening of “Kobe” port in the Meiji era, a lot of buildings were built for the residences of foreigners. Now the value as the culture is accepted and there buildings are opened to the public.

The recommendation is the “Kazamidori-no-yakata” (hall of the weathercock) and the “Uroko-no-ie” (the house of scale). The garden of “Uroko-no-ie” is beautiful. These are called the representative of the “Ijin-kan” (foreigner’s house).

There are many souvenir shops and restaurants because it is now a sightseeing spot.
Because the sidewalk is built along the hill, and there are the slope in many places, so it is hard to walk around.
But the scenery is very beautiful, you can enjoy the sightseeing of “Ijin-kan”.

Also, the Starbucks “Kitano Kobe Ijin-kan-gai” in ways from the “Ijinkan” street to motomachi, is a shop which was redecorated from one of the “Ijin-kan”. You can feel the atmosphere of each room as those days.

Using the City Loop Bus, you get on the northward bound bus in “Subway Sannomiya Station-Mae”, and get off at the “Kitano Ijinkan” stop. 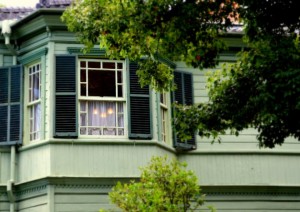 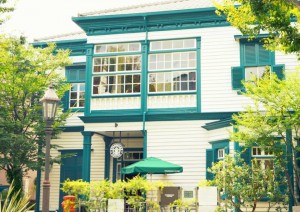