In Japan, June marks the beginning of summer and also Tsuyu – the rainy season that lasts until mid-July. It rains most of the time during the rainy season. Other times, it’s hot and humid. For many, it’s definitely not the most enjoyable kind of weather. However, even in this time of the year, there is still something to look forward to:  it’s the joy of welcoming Ajisai (Hydrangea) back in town. The gentle Ajisai dreamily blooming under the soft rain can brighten up a gloomy day, which is why it is a widely-beloved symbol of the season.

For our June 2017 edition, we have curated beautiful ajisai goodies and delicious snacks that either resemble the Ajisai or are often consumed by Japanese during this time of the year.

The Lifestyle Box features gorgeous looking and also highly functional goodies that help you brighten up your surrounding with a sense of nature. 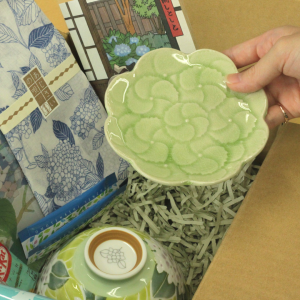 The set consists of a rice/soup bowl and a dessert plate. The bowl is painted inside and textured outside with hydrangea flowers and leaves while the plate resembles the shape of a hydrangea. 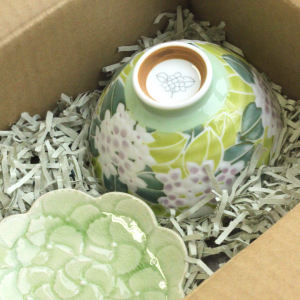 Originated from Gifu Prefecture, Mino-yaki is the most popular pottery in Japan. Its history is said to date back to 1300 years ago. 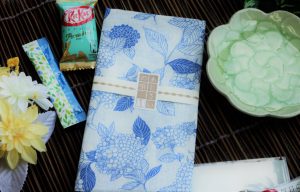 The elegant handkerchief can be used/worn in so many ways. This is one item you won’t regret having in your summertime closet! 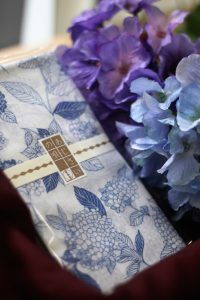 Yonagado is an Osaka-based retailer and producer of cloths and stationery that promotes Japanese modern-retro designs. 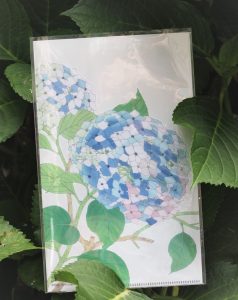 You will sure get organized in style with this beautiful document folder. Look how detailed the flowers and leaves printed on the folder are!
Unsodo (est. 1891) is a Kyoto-based publishing house famous for its Japanese woodblock printing technique. 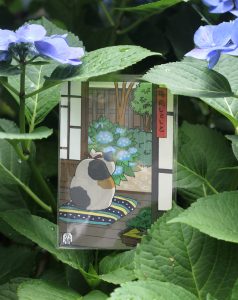 The ukiyo-e styled postcard portrays so well Japan’s rainy season: a cat silently looking out to a Japanese garden where the hydrangeas are blooming under the soft rain. That’s why it also got featured in the Snack Box!
Ukiyo-e is an important genre of art that flourished in Japan during the Tokugawa era (1603–1867). 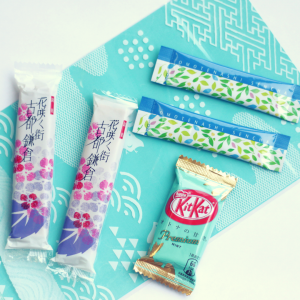 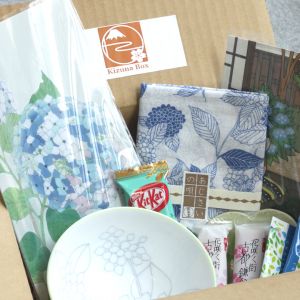 For the June 2017 Edition, we curate Japanese traditional summer treats, summertime special edition snacks and artisanal sweets from Kamakura, the town of hydrangeas for the Snack Box. 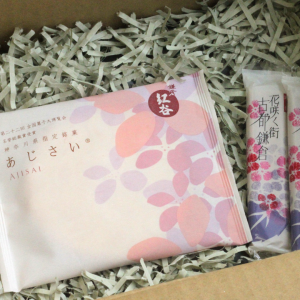 Kamakura is a historical city located 50km south of Tokyo, known for its tranquil temples, the Great Buddha statue and also the hydrangeas. 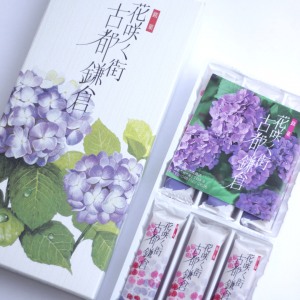 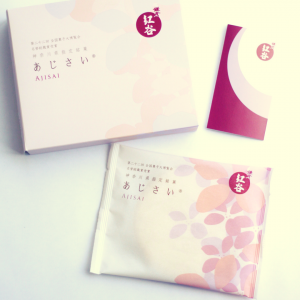 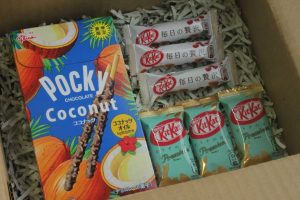 Pocky Chocolate Coconut, Kit Kat Premium Mint & Kit Kat Almond & Cranberry. These are the flavors you can only get in Japan! 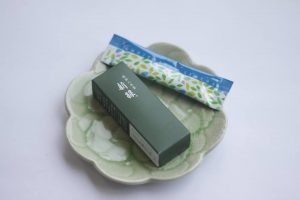 Toraya is a famous traditional sweets (wagashi) maker. You will never go wrong with Toraya yokan as a summer gift.

Yokan is a Japanese traditional jelly bar made mainly of red beans.

Ito En is a leading green tea drinks producer in Japan. What unique about this instant green tea is that you can make it with cold water. Green tea is one of Japanese’s favorite summer drinks. 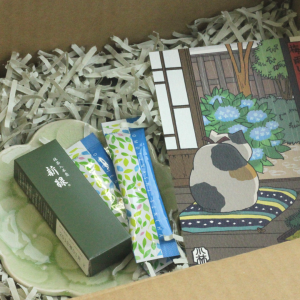 The true taste of Japan’s rainy season in a box! 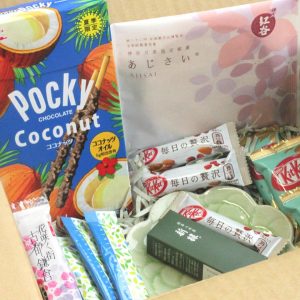