“Ginnan” (ginkgo seeds) is a seed of an “Ichyo” (ginkgo tree).
We break the husk of the ginkgo, and cook the seed inside to eat.

The ginkgo is used for the ingredients, such as “Chawanmushi” to serve as color. It is popular as snacks for “sake” .

The starch is included in richness. And it has sticky feeling and unique texture. But there are unique bitterness and bad smell!! Some people like the bad smell of it.

“Ginnan” are produced in the whole land of Japan and spread out as autumn ingredients at coming time.
Mainly we bake it or steam it with other ingredients to eat.

By the way, one of the Japanese three famous castle “Kumamoto” castle is called the “ginkgo castle” in another name.
Also, “Ichyo” is familiar to a Japanese so as to plant the tree of ginkgo as a symbol of a city and facilities.

The tree of ginkgo is seen in many places of Japan, because it has been loved from old days. 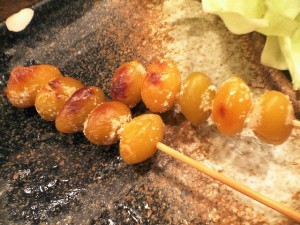 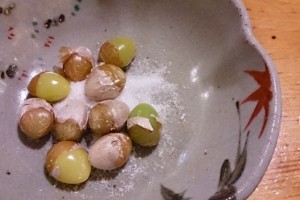