The main god’s “Yahata Ookami” is the Holy Spirit of Emperor “Oujin”.
“The Usa major shrine” does veneration as the second ancestral mausoleum of the Imperial family which the Imperial family pours “Ise Jingu”. And it is listed in 16 companies of the “Chokusai-sha Shrine”.

※”Chokusai-sha Shrine”: It is the Shinto shrine in which Emperor’s messenger goes at time of the festival.

The beautiful main shrine building is appointed to a national treasure. 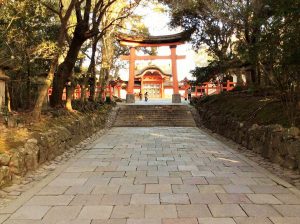