Tokyo Station is main terminal station in center of Tokyo.

So, it is big station because there are 28 tracks in JR, and 2 tracks in Tokyo Metro. Throughout the day, a lot of trains arrive and depart.

Around Tokyo station, it is near the Marunouchi business district, the Imperial Palace grounds and the Ginza commercial district. So many people use this station everyday.

In 2012, Tokyo Station building at Marunouchi side was restored. It is named “Aka renga station” (red block station). And it is designated as an important cultural property of Japan in 2003.

In Marunouchi North Exit, there is the JR EAST Travel Service Center for foreign travelers. The staffs speaking English, Chinese and Korean tell the tickets and sightseeing information. 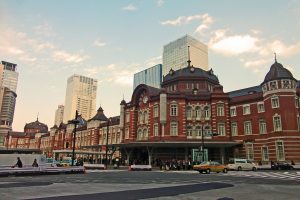