“Inkan” is the things that the name of an individual or company name was carved.
Often now, it is called “Inkan” or “hanko” in the society, but formally called the “Inshou”. The marks which was made by the “Inkan” are called “Inei” (imprint).

In Japan, “Inkan” is very important.
Own’s “inkan” can enroll in the government office.
If 15 years of age or older, you can register one “Inkan” by one person. The registered “Inkan” is called “Jitsu-in” (official seal).

In Japan, it is said to have been introduced from China in about AD 57.
A gold seal of “Kan-no-na-no-kokuou” (“the King Han committee guy”) is famous as the Japanese oldest “Inkan”.

In Japan, “Inkan” is used in everyday.
It uses for the receipt of baggage such as home delivery service.
And, it is necessary when make an account newly in the bank.
The purchase of real estate requires a “Jitsu-in”.

By the way, you can buy “the seal” anywhere all over Japan.
In recently, “Inkan” carved together has the animation character and one’s name.
In addition, there is also the service to create the seal to fit the name of the foreign people to “kanji” (Chinese characters).

The memorial of visit to Japan, do you make “Inkan”? 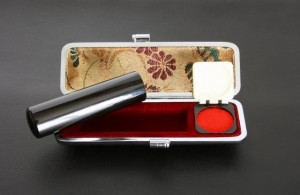 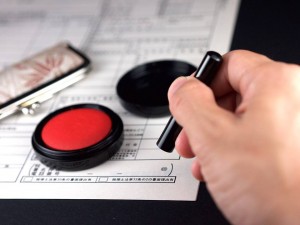