“Ishi-yaki-imo” is a Japanese food using the kind of potatoes called “Satsuma-imo”.

In about 1705, the sweet potato was introduced into “Satsuma” (now “Kagoshima” Prefecture), and “Satsuma” feudal clan started to cultivate the sweet potato at their land.
So, “Satsuma” became the birthplace of “Satsuma-imo”.
“Ishi-yaki-imo” is a baked potato dish using the heated stone. We place the “Satsuma-imo” onto heated stones and cook them by indirect heating. Therefore they turn sweeter than ones cooked normally.

Please eat this “Ishi-yaki-imo”, if you come to Japan at winter time.
You can purchase at convenience stores, supermarkets, specialty stores and even at the mobile stand! 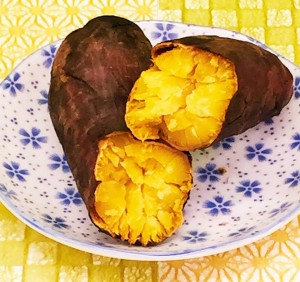