Today’s “Wagashi” is “Mitarashi Dango”.
“Mitarashi Dango” are dumplings coated with a soy-and-sugar syrup, and usually three to five dangos are stuck in a stick.
It is also called “Shoyudare Dango” (dumplings dipped in a soy-based sauce) or “Yaki Dango” (toasted dumplings).
It is traditional Japanese sweet in Japan. It is popular among people liking sweet, salty sauce.

It is sold in a convenience store and supermarket throughout the year.
Basic recipe is same. But there are various seasoning, so it is called in different name by an area and a shop. There are various type of “Mitarashi Dango”.

Anyway, it is so delicious. If you like salty-sweet taste, you might be crazy about this taste. 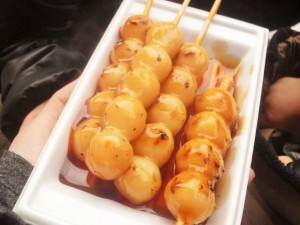 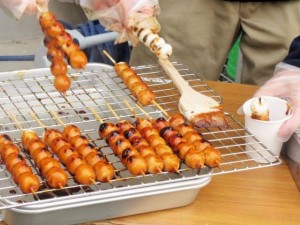