“Takuan” is a kind of “Tsukemono”. It is pickled daikon (radish). “Takuan” is often served alongside other types of “Tsukemono” in traditional Japanese cuisine. It is also enjoyed at the end of meals as it is thought to aid digestion. And we eat it with the Japanese tea, too.

The way of making “Takuan”.
1) to hang a daikon in the sun for a few weeks until it becomes dehydrated and flexible.
2) the daikon is placed in a pickling crock and covered with a mix of salt, rice bran, optionally sugar, daikon greens, konbu, chilli pepper.
3) a weight is then placed on top of the crock, and the daikon is allowed to pickle for several months.

In Miura Peninsula (Kanagawa), traditional “Takuan” is made. A daikon is hung in the sun along the beach. It is famous seasonal place in winter. 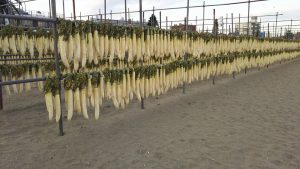 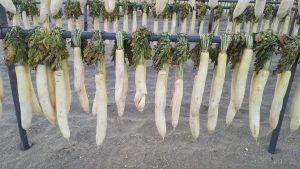