“SUKIYAKI” is a typical contemporary Japanese dish when we eat beef.
Almost, we eat “SUKIYAKI” in winter.
Beef, vegetables (Negi, Chinese cabbage, Shungiku, Shiitake and Enokitake etc.) and tofu are put into an iron pot. Seasoned with soy sauce and sugar, and then we dip into a raw beaten egg to your liking.
The vegetables and tofu which are soaked into the sauce, it is so delicious!

The history of the “SUKIYAKI” is unexpectedly short and was born in the last years of Edo era.
Eating meat was forbidden publicly in Japan until the Meiji era began, but a “SUKIYAKI shop” was born for the first time in the Kyoto by the late Tokugawa period.
The Meiji era began, and there was an opportunity that the “Emperor Meiji” ate beef. And it was lifted the ban on eating beef to the people at large. “SUKIYAKI” was all the rage among the common people.

“SUKIYAKI” is known as representative Japanese food along with sushi and tempura now all over the world.

You can eat it at not only well-established Japanese restaurant but also at beef bowl chain stores in Japan. 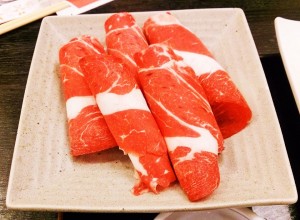 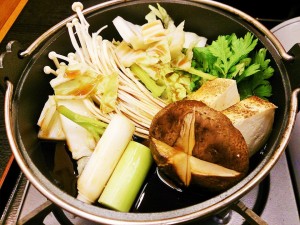 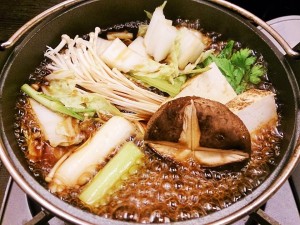