Today’s Japanese word is “Hanafuda” 花札 (The Japanese Flower Card game).
“Hanafuda” is one of the card game in Japan.

By the way, Do you know the “Nintendo”?
“Nintendo” is a company that sell many kind of computer game. For example, the Nintendo DS and Wii and so on.
Have you ever heard about this company’s name?

This Nintendo is manufacturing wholesaler of “Hanafuda” representing Japan.

Azuchi-Momoyama era, Portuguese sailors brought a card game to Japan.
And, it was the origin of “Hanafuda”. It is called “Caruta”.
“Hanafuda” imitated the playing cards, it consists of 48 cards.
But there is no number in “Hanafuda”.
On the other hand, “Hanafuda” is characterized flowers and birds, poetic 12 months is drawn.

※[] Inside is a special Pattern.
Normal Card is 1 point, special pattern card is 5～20 points.

“Hanafuda” is also a play called “Koi-Koi”.
But, it is a little difficult to remember the rules and the card designs.
Seeing “Hanafuda”‘s designs is to imagine Japan, please enjoy leisurely. 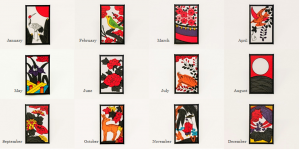