“Ikayaki” is a Japanese dish using a whole squid. The squid is flavored with soy sauce and bake it.
It is also called “Ika-no-sugata-yaki” or “Ika-no-maruyaki” (a barbecue of the whole squid).

It is eaten in various parts of Japan. It is sold mainly in a festival and recreation facilities.

On the other hand, “Ikayaki” of Osaka is a dish using wheat flour.
Put inside a cut squid in the wheat flour dough, and paste salty-sweet sauce on dough by brushes.

“Ikayaki” in “Hanshin Department Store” at Osaka is very popular. It is said that they had sold 10, 000 pieces per day! So that customers stand in long line to buy it.

I haven’t yet eaten the “Ikayaki” of “Kansai” (Osaka) either.
I also want to eat it, if it is so delicious. 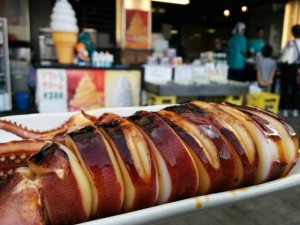 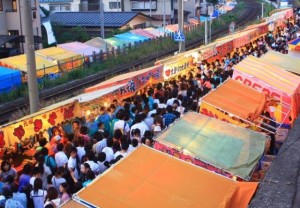