It was a beginning of “Hiroshima yaki” to have named when a person from Hiroshima opens an “okonomiyaki” shop outside of Hiroshima prefecture.

How to make “Hiroshima yaki”:
1) On an iron plate, bake the wheat flour dough which is lengthened thinly.
2) On the baked dough, put the ingredient materials in the order of cabbage, sprout, tempura scraps and sliced pork.
3) Sprinkle salt, pepper and wheat flour in small quantities and reverse the dough together with an ingredient.
4) While heating the ingredient materials, fry the soba noodle. After well done, season the “yakisoba” (fried soba noodle) with a fish meal and worcester sauce.
5) If ingredient materials are well done, put ingredient materials and dough on the “yakisoba”.
6) Break an egg, and spread to size of the “okonomiyaki” with a “hera” (spatula) and put 5 on the top. Upset it and make egg the top.
7) Fully paint the egg with worcester sauce and sprinkle a green string lettuce and done!
8) It is delicious even if you put mayonnaise on the source. Furthermore, it is delicious even if you put full of “kizami-negi” (minced green onion) for preference!

“Hiroshima yaki” is the dish being satisfied for us! 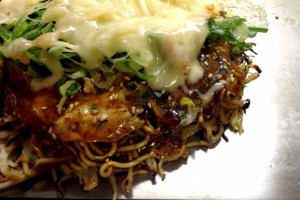