“Ayu” (sweetfish) is a fish wandering in a river or the sea.
Japan is the center of the habitat.

They are distributed other than Hokkaido of Japan, and widely in East Asia from the Korean Peninsula to northern Vietnam.
I think that it is familiar with everybody.

“Ayu” has a habit to eat the alga on a stone, it inhabits in the river with such an environment.
It is the fish which fitted the Japanese river than the long and large vast river of the continent having a lower basin.
In addition, “Ayu” inhabits only the clear stream in Japan.

It is a fish targeted for representative river fishing in Japan. And “Ayu” is an important food fish.

It is said that it is the best to eat the fish with “sashimi” (raw fish) generally in Japan. But “Ayu-no-sio-yaki” (broiled “Ayu” with salt) is especially best about eating the “Ayu”.

It is said that a “Waka Ayu” (young sweetfish) captured during the early summer time are considered especially tasty. 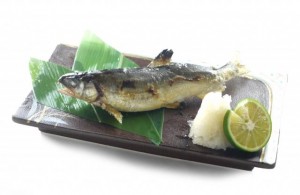 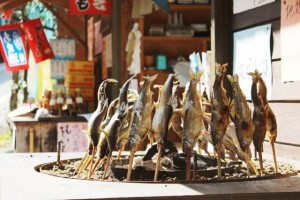 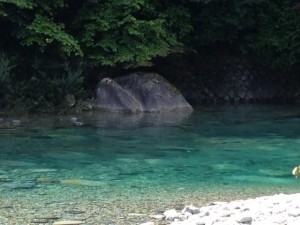