In Japanese cuisine, konjac (konnyaku) appears in dishes such as oden. It is typically mottled grey and firmer in consistency than most gelatins. It has very little taste.

Konjac has almost no calories, but is very high in fiber. Thus, it is often used as a diet food!!

Japanese konnyaku is made by mixing konjac flour (made from konnyaku potato) with water and limewater. “Hijiki”(sea vegetable ) is often added for the characteristic dark color and flavor. Without additives for color, konjac is pale white. It is then boiled and cooled to solidify.

The konjac is used for “oden”, “nimono” (food boiled and seasoned), miso soup, the ingredient of soup and the dish cooked at the table including the pork miso soup mainly. In addition, we stab a skewer into konjac and am used as material of the “miso dengaku”. “Shirataki” (in noodle formed konjac) is used for “sukiyaki”.

The konjac are used for various Japanese foods, so you can eat it! 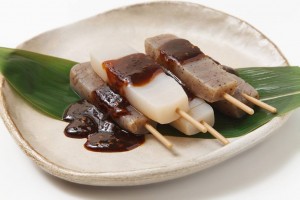 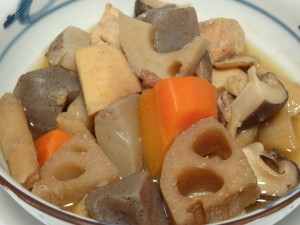 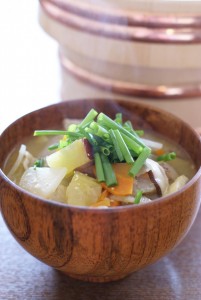 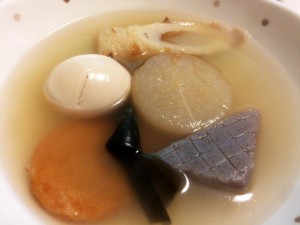