Enoshima Electric Railway (so-called “Enoden”) is a private railway between Kamakura station and Fujisawa station. It is 10km long and 34minutes ride.

You can enjoy a short trip among the cities, beautiful beaches and temples such as “Daibutsu”, “Hasedera” temple and “Kousokuji” temple. Both temples are famous for flowers. You can get off for some restaurants and souvenir shops.

From the train windows, Mt. Fuji with snow on top can be viewed. Walking on the beaches at “Inamura-gasaki” or “Shichiri-gahama” will be enjoyable. You can have a refreshing time on the beaches with the sound of waves as BGM from the Pacific Ocean.

You can drop in at “Enoshima” on the way. “Enoshima” is a beautiful small island, which is connected with the mainland by a bridge.

You may buy the ticket “ENODEN 1-DAY PASS TICKET NORIORIKUN”.
This ticket is allowed to board and disembark at any station on the entire Enoden line any number of times during one whole day. It costs 600 yen (Adult), 300 yen (Child). 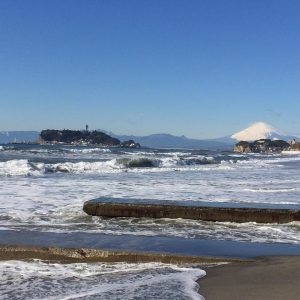 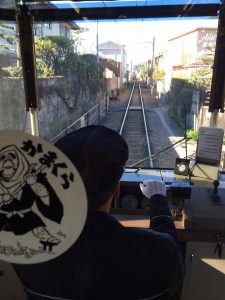