“Wa-guri” is a kind of chestnut.
The habitat of the chestnut extends over four major land. Asia, Europe, the United States and Africa.
Of course “Wa-guri” is planted only in Japan.

The feature of “Wa-guri” is that nut is big and has good flavor.
On the other hand, it is slightly little sweetness, inner skin is hard to come off, and the sarcocarp is easy to be separated.
A color of the sarcocarp is yellow. There are about 100 kinds “Wa-guri”.

We normally eat “Wa-guri” by “Yude-Kuri” (boiled) or “Kanro-ni” (stewed in soy sauce and sugar). We often eat it as sweets. The “Kanroni” is just usable to a marron cake, too.

But also, we cook “Wa-guri” into rice to eat it as main dish. We call it “Kuri-gohan”. Soft, and smooth food texture are wonderful.

There is an event called “Kuri-hiroi” (chestnut picking) in Japan. We go to the farm of chestnuts to gather “Wa-guri”.
You can enjoy picking chestnuts for about 1, 000 yen.

The period when “Kuri-hiroi” is possible is until from September to the end of October. 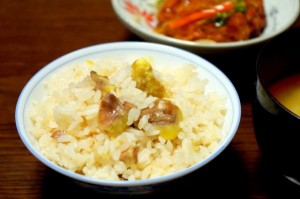 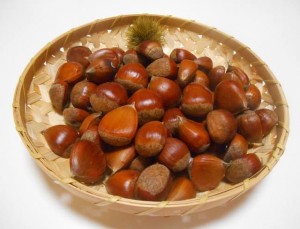 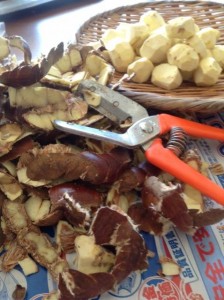