“The shogi” is a one of the strategy board games by two players in Japan.
It is commonly referred to as the “Hon-shogi”.
The origin of “Shogi” is Indian ancient “Chaturanga”.
The playing of “Hon-shogi” is the same way as such as chess. The population of playing “Shogi ” is an estimated 6.7 million people in the world.

The “shogi” is called “Hon-shogi”, it is main game name. And other games are “Hasami-shogi” or “Mawari-shogi”.
These use the piece of the same “Shogi’s Koma”, but rules are different. 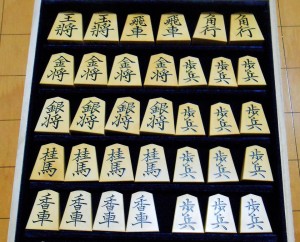