“Inarizushi” is made by “aburaage” (bag shaped deep fried “tofu”) and “sumeshi”.
It is stuffed with simply “sumeshi” or “sumeshi” mixed with ingredients like carrots and mushrooms.

Generally, we shape it resembling a straw bag of rice.

“Inarizushi” is not seen very much in high-class sushi shops, but is a popular sushi in common shops and takeout sushi shops.

There is also a characteristic “Inarizushi” of each place.
1) The Aomori Tsugaru district: “Beni shoga” (red pickled ginger) and walnut is mixed in “sumeshi”. The “sumeshi” turns into pink by “beni shoga”.
2) Nishi nihon (West Japan): They make “Inarizushi” from “sumeshi” mixed the ingredients materials such as “shiitake” mushroom, carrot, and sesame. It is called “Gomoku Inari”. And the feature in West Japan is triangle.
3) Okinawa: In Okinawa, there is simple “Inarizushi”. It is non-tasted “aburaage” and “sumeshi”.
4) Outside of Japan: It becomes the popular food in the land where once many Japanese emigrated, such as Hawaii. 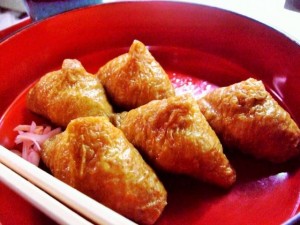 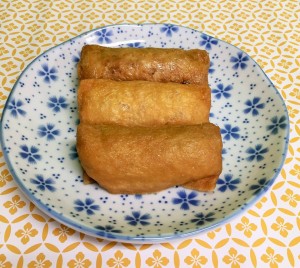 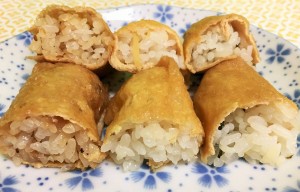