“Okonomiyaki” is a kind of the baked foods, using various kinds of wheat flour. It is a Japanese popular dish!

First you bake a wheat flour dough (which is dissolved in water), vegetables, meat, seafood on an iron plate.
After baked, put on the seasonings such as Worcester source, mayonnaise, “aonori” (the green dried seaweed) and it is just to eat.

The characteristic of “Hiroshima style’s okonomiyaki” is, bake the dough thinly first. And put on shreds of the cabbage, noodles such as a “soba” or “udon”, pork on the dough and bake it. We make it in a way “kasaneyaki” (repeatedly baked) without mixing ingredient materials with in dough.
Also, a lot of chopped green onion is used on “Hiroshima style’s okonomiyaki” for the topping.

Which “okonomiyaki” do you prefer? 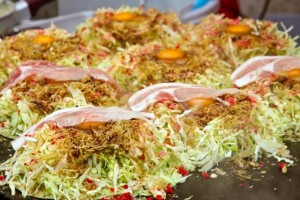 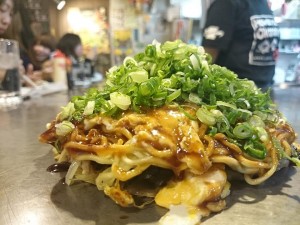 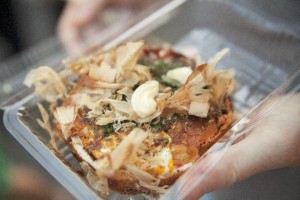