Became in April
Japanese people feel very new mood in April.
What kinds of event will there be in April?
1) April Fool (4/1)
April Fool’s Day has been popular all over the world.
Of course we enjoy in Japan, too.

3) “Ohanami” (cherry-blossom viewing)
In April, Japan is in the middle of the spring.
A lot of flowers bloom.
The cherry blossoms are full bloom in all over the Japan.
There are a lot of people enjoying the party while watching many flowers in the parks.

4) Showa’s Day（4/29）
This day is one of the holiday from the previous, which was named “Emperor Showa’s birthday.”
However, Emperor Showa was passed away. So that name changed “Greenery Day”.
The reason is do not seem to forget the times called Showa.

In April, it begins to bloom a lot of flowers.
People also change to the thin spring jacket from thick coat, and we will be cheerful mood.
Let’s enjoy the spring in April! 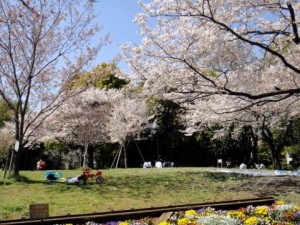