“Teishoku” is Japanese cuisine (“washoku”). It encompasses the regional and traditional foods. The traditional cuisine of Japan is based on rice with miso soup and other dishes. In each season, seasonal ingredients are served.

Japanese cuisine is based on combining “gohan” (steamed white rice), and one or several “okazu” (main dishes and side dishes). This may be accompanied by a clear soup or miso soup and “tsukemono” (pickles).

The phrase “ichijū-sansai” (one soup, three sides) is famous in Japan.

Generally, side dishes consist of fish, pickled vegetables, and vegetables cooked in broth. Seafood and vegetables are also deep-fried in a light batter, as tempura.
The rice is separated. Sometimes, noodles, such as soba and udon is served.
Japan also has many simmered dishes such as fish products in broth called oden, or beef in sukiyaki and “nikujaga”. 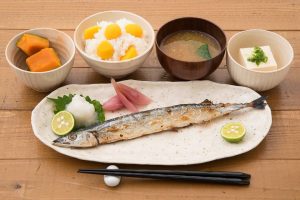