“Karinto” is a kind of the Japanese sweets.

“Karinto” is the popular as the traditional sweets. And “Karinto” exists as the well-established product known as the high-quality Japanese sweet, too.

To make “Karinto”, first you knead wheat flour dough with sugar, water, yeast, salt, sodium bicarbonate and mold into a rodlike.
Fried the stick dough with vegetable oil and dry it. And coated it with the honey. It is completed.

In modern Japan, some kinds of “Karinto” is sold commercially available, such as calcium, walnut seed, green tea powder, a soybean, buckwheat flour, a peanut, and various green vegetables and so on.

There are some kinds of “Karinto” in each region.
“Karinto” of Kanto performs fermentation of the dough longer. So it is relatively soft and is light. White sugar is sometimes used to make the syrup to coat “Karinto”.

On the other hand, in the Kansai region, since the stiffer dough is used, the texture of “karinto” is characterized to be somewhat tough.

In the Himeji region, “Karinto” is referred to as the “Banshu dagashi” (cheap sweets) and has developed as an inexpensive sweet.

Also you can make “Karinto” from an ear of the bread. Fry the bread ear in oil and put on syrup of sugar and honey.
It is made as domestic snacks. 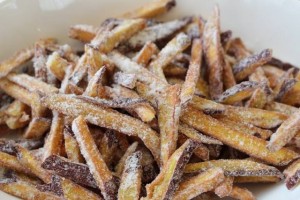 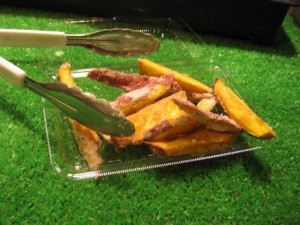