What kind of sound do you imagine when you imagine “summer”?
I am the sound of the “iron wind chime, And the sound of “fireworks”.
This “iron wind chime” has a clear sound, which is different from the wind chime made of glass or pottery.
And the sound of “fireworks”.
Of course, I like the loud sound of “launch fireworks”, but I also like the sound of “handheld fireworks”.
I like “senko-hanabi” (Japanese sparklers) sound.
“Senko-hanabi” is a very small firework with a small amount of gunpowder wrapped around the tip of a thin piece of paper. The “senko-hanabi” are so fragile that they disappear even if the wind blows a little.
“Senko-hanabi” is a toy firework unique to Japan. When the tip is ignited, they scatter beautiful pine needle-patterned sparks as they burn. In the end, a big fireball is formed, and it becomes beautiful willow-like fireworks.
It’s common to enjoy it until the end so as not to drop this big fireball.
There are other ways to enjoy this “senko-hanabi” besides purely watching the sparkle. It’s about who can keep the fireball for the longest time, or who can keep the fireball until it disappears. Children make various rules and play with “senko-hanabi”.
“senko-hanabi” is said to have been made in the Edo era. With the popularity of fireworks, it was made as a children’s toy from about 1660 onwards.
Although it has a long history, it is still one of the fireworks that are loved by children and adults alike.

1. Mino-yaki Night fireworks tableware (plate or bowl) (each 1 item)
You will get either a plate or a bowl. This summer-like plate has fireworks drawn in the summer night sky. The colorful dot color scheme on the glossy jet-black fabric has a great impact! Tableware that is easy to use for various dishes. 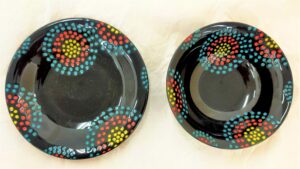 2. Mino-yaki “Tokusa” square plate
“Tokusa” is a vertical stripe pattern that has been popular in Japan for a long time. It is an auspicious pattern that brings good luck. The finely drawn “Tokusa” pattern on the black plate looks like a “Senko-hanabi” (Japanese sparklers).

＜Mino-yaki＞
Originated from Gifu Prefecture, Mino-yaki (Mino ware) is Japan’s most popular pottery.
Its history is said to date back to 1300 years ago. 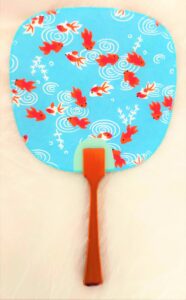 4. Mino-yaki “Medaka” small plate
A lovely small plate with the appearance of “medaka” (Japanese killifish) playing in a gentle clear stream.
“Medaka” is often bred at school or at home, and is a very popular fish in Japan.

5. Summer-themed stickers
It is a sticker about summer Japanese-style with an elegant gold leaf.

６.Mino-yaki Deep sea blue plate
This plate has the image of the deep sea, and its expression changes little by little depending on how the
light hits it like the sea. The traditional “Tokusa” pattern drawn with a water-repellent finish tightens the
atmosphere of the dining table.

7.”Nanbu furin” (Nanbu wind bwll)
This “Furin” (wind bell) is made of Iwate Prefecture’s traditional craft “Nanbu Tekki” (Ironware). This “Furin” is different from glass “Furin” and is characterized by its high clear sound.
The sound of the “Nanbu Furin”, which is decorated every year from June to August, at JR Mizusawa Station (Iwate Prefecture Oshu city), has been selected by the Ministry of the Environment as one of the “100 favorite Japanese sounds to leave.
* When using it, attach the attached translucent strip to the tip of the thread extending from a small iron piece called “Zetsu” inside the wind chime bell.

8. Morning glory pattern cotton handkerchief
It is a nostalgic and retro patterned “Tenugui” (Japanese style handkerchief). “Tenugui” can be used in various ways depending on the idea. It is made from 100% cotton in Japan.

9. Nostalgic summer landscape postcard
It is a postcard with a nostalgic pattern that looks like a cutout of the summer landscape of Japan a long time ago. Would you like to use it as a summer greeting card for your friends and loved ones? 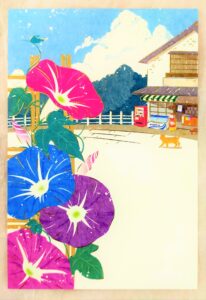